Toastmasters at CSUSB: On to the Advanced Manuals 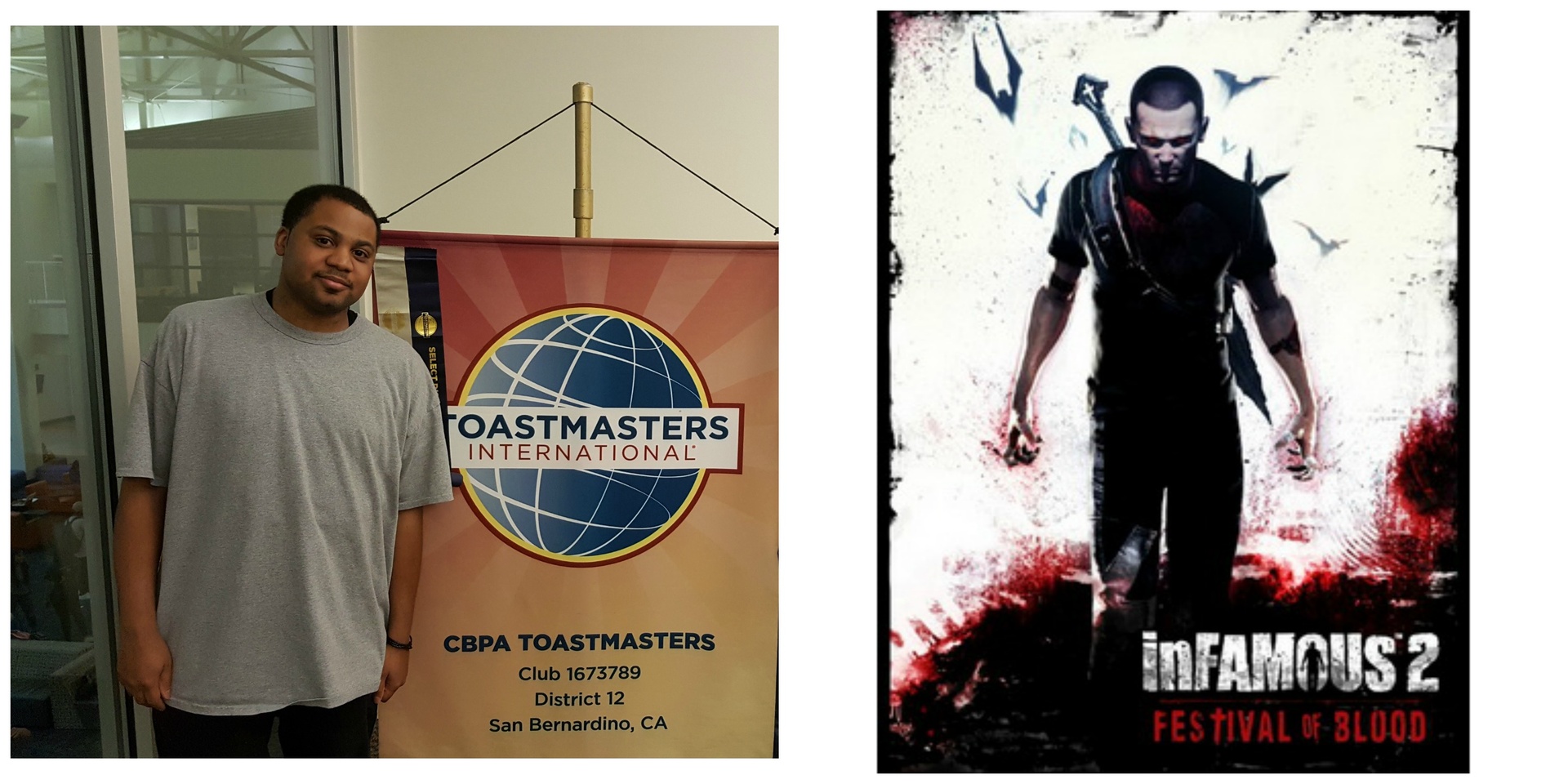 On Nov. 30th, I presented my first speech from the advanced manuals and it was entitled, “Bloody Mary.” The speech was about interpreting a folktale and for the speaker to engage the audience with their storytelling skills.

I chose the folktale of Bloody Mary because Sucker Punch Productions made a DLC (downloadable content) spin-off game for the PlayStation 3 from the inFAMOUS universe called “inFAMOUS 2: Festival of Blood.”

The game was Sucker Punch’s interpretation of the folktale Bloody Mary and I felt I could grab the audience attention with their story, and for the most part I succeeded.

For instance, I started off nervous, but the longer I talked the more comfortable I got.

The story starts with Zeke trying to pick up a beautiful woman at a bar, and once he told her he was friends with superhero Cole MacGrath. The woman was interested in knowing all about an event called Pyra Night.

Pyra Night is about how Cole was looking for survivors in a church, but got knocked unconscious by a woman who he thought he was helping. He was then handcuffed and dragged to an underground room by vampires.

When Cole finally woke up, he was on top of a dead woman’s corpse who happened to be Bloody Mary. A vampire cut Cole’s throat and blood dripped into Bloody Mary’s mouth and she slowly came back to life (Cole is superhuman and can control electricity, and his blood slowly brought her back to life).

When Bloody Mary finally came to, she bit Cole in the neck. Her bite was like a Pitbull, but with syringes for teeth and the more blood she drank, the prettier she got.

Cole became a vampire after he got bit from Bloody Mary, and he only had four hours to find the special barbed cross and kill her to reverse the curse. He had to do this before the sun comes up or else he would be forced to be Bloody Mary’s slave and be a vampire.

By the end of the game, Cole eventually defeats Bloody Mary with the barbed cross and reversed the curse.

Back at the bar, the woman didn’t believe Zeke’s Pyra Night story and Cole walked in asking Zeke for a favor because he dropped his Amp in a pool and he needed help getting it out.

When the woman saw Cole, she offered to help him and they both left the bar leaving Zeke alone by himself. Before walking out of the door, the woman said, “Hey Zeke interesting story, very educational.”

The woman then showed Zeke her vampire fangs, and turns out she was a vampire the whole time while Zeke was telling her all about the Pyra Night event.

I felt I performed great and it was one of my best speeches. I was also able to grab the audience attention. I did a great job using vivid storytelling. For example, I said Bloody Mary’s bite was like a Pitbull, but with syringes for teeth.

My story was also well organized and complex.

I had mixed reviews with the audience because some said I looked timid and nervous while others said they didn’t sense nervousness at all and I was confident while speaking.

Overall, I walked away from the meeting proud because I felt I did my best and the audience was engaged.

I’m glad I was able to perform one of my next round of speeches on the last meeting of the quarter at Toastmasters at CSUSB. The club will resume when the next quarter starts at CSUSB.

I could honestly say that I am proud of what I’ve accomplished so far, but I know there is much more work to do and I’m up for the challenge.

* Earlier this week I met up with a friend and he introduced me to his mentors. He told his mentors about my story and they wanted to meet me. The meeting went great and they gave me valuable information and I soaked it up like a sponge.

* When I told them about my story of being a two-time cancer survivor and hip amputee. They expressed that they were impressed that I am determined to move forward with my life and help others.

* Before we went our separate ways I gave them some of my business cards, and they gave me a few motivational books to read before we meet again. I’m appreciative for this networking opportunity because I’ve been preparing and I’m ready for the next step in my journey to move forward.

* On Nov. 30th, I received an email from SRL Network. They are an artist relations company representing musicians and labels around the world. They also work with independent authors, graphic designers and filmmakers.

* I believe they discovered my website and they expressed interest in me auditioning. I replied to the email and I’m looking forward to their response.

I don't own any content from the image displayed from Toastmasters at CSUSB.

No Copyright Intended. All image content is copyright to their respective owners. All content is property of Toastmasters at CSUSB.