The Beginnings of the Yoruba 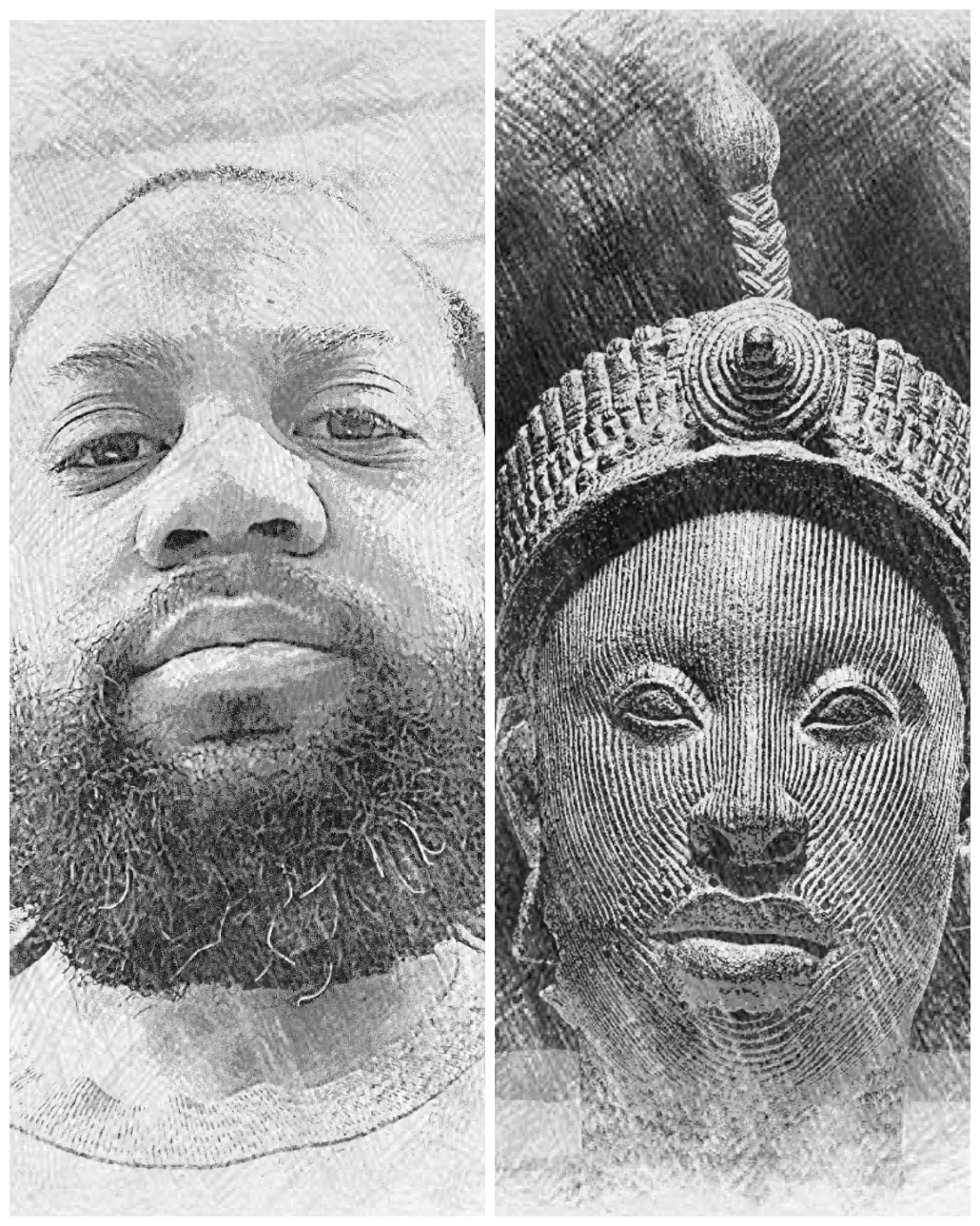 So monumental was the role of Ooni (King) Oduduwa of the Ife Kingdom that popular traditions and legends elevated him to the pedestal as the father of the Yoruba people, all people of the world, and he was crowned as the first person to walk the earth.

The Yoruba of West Africa have graphic myths of creation and of origins. The whole surface of the earth was one watery matter, Olodumare or God “King of heaven” sent down heavenly beings (Orishas) to create solid land, plant life and animal life, on earth. The Orishas brought with them some quantity of earth, one chicken and one palm nut. They also came down by a chain and landed on the spot that is now known as “Ife” in the heart of Yorubaland.

The Orishas poured the earth onto the water, and this created a small piece of solid land. They then set the chicken on the land, and as the chicken scratched at it with its claws, the small piece of dry land spread and continued to spread until all the continents and islands of the world came into existence. When the Orishas sowed the palm nut, it sprouted and grew as the beginning of plant life in the world.

The Orishas became the progenitors of humanity. The place where all this happened was the Ife Kingdom, “the source of the spreading.” It was generally believed that the Ife Kingdom was so close to heaven that one could meet their departed ancestors in its streets; and that in some hidden shrine in Ife could be found the gate of heaven. The Yoruba people believe they are the first race of humans, and all human life and civilization originated from Yorubaland. The Ife Kingdom became the first place that God created in the world, and the source of all earthly existence. The gods that watched over the Yoruba people were believed to have their primary abodes in Ife. 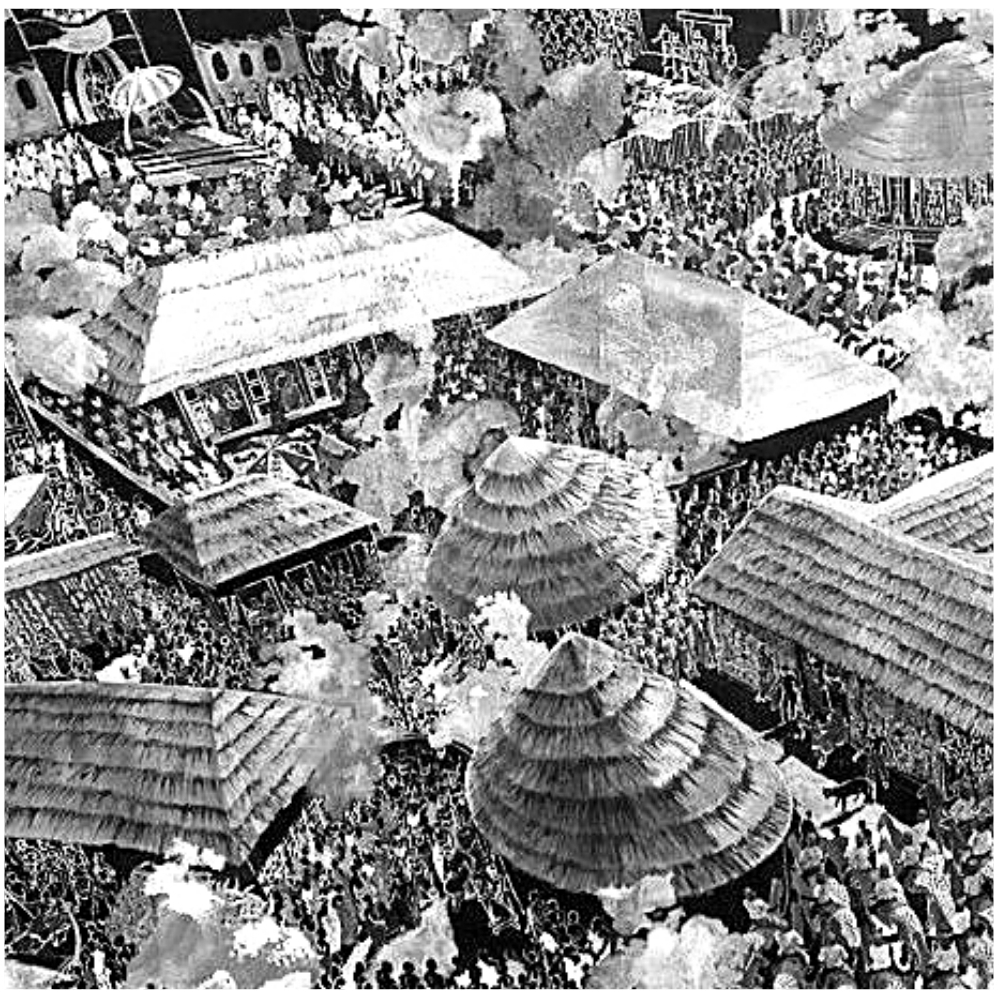 The Ife’s (Yoruba subgroup) are the first Yoruba people, and they are ancient, originally spiritual, highly advanced artistically and creatively, and agriculturalists. 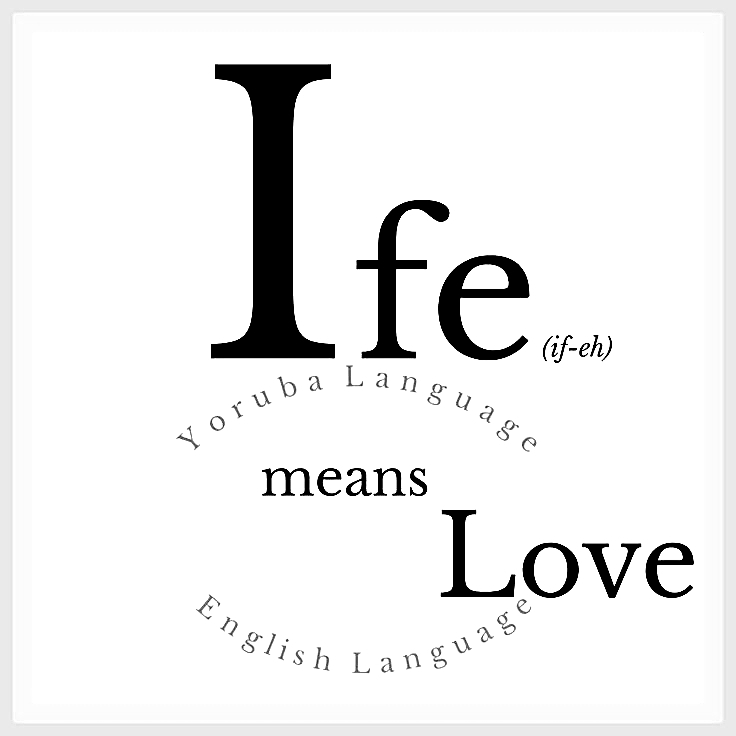 When the Ife people were camped outside of their ruined kingdom at the Isoya village during the 19th century, by the chiefs of Ife, the Ife people were “the father’s of all tribes,” and if they continued to camp longer and unable to resettle their kingdom, “the whole world would spoil, as they were the priests of the deities (Orishas) who ruled the world.” When British agents visited the Yoruba interior in 1886, they were told by the Alaafin (King) of the Oyo Kingdom (Yoruba) that “the Ife’s… were the father’s of all and all people came from Ife.” By the Seriki of the Ijebu, Chief Ogunsigun, that “Even the English king can be shown the spot at Ile-Ife (Ife Kingdom) from where his ancestors went out.”

So monumental was the role of Ooni (King) Oduduwa of the Ife Kingdom that popular traditions and legends elevated him to the pedestal as the father of the Yoruba people. His successors deified him, and subsequent generations transposed him to the very beginning of creation and crowned Oduduwa as the first human to walk the earth. Ife palace traditions have it that King Oduduwa himself, while on his deathbed initiated the kingdom-founding movement urging his family members to go out and establish kingdoms like the Great Ife Kingdom. This was how Yorubaland was born. 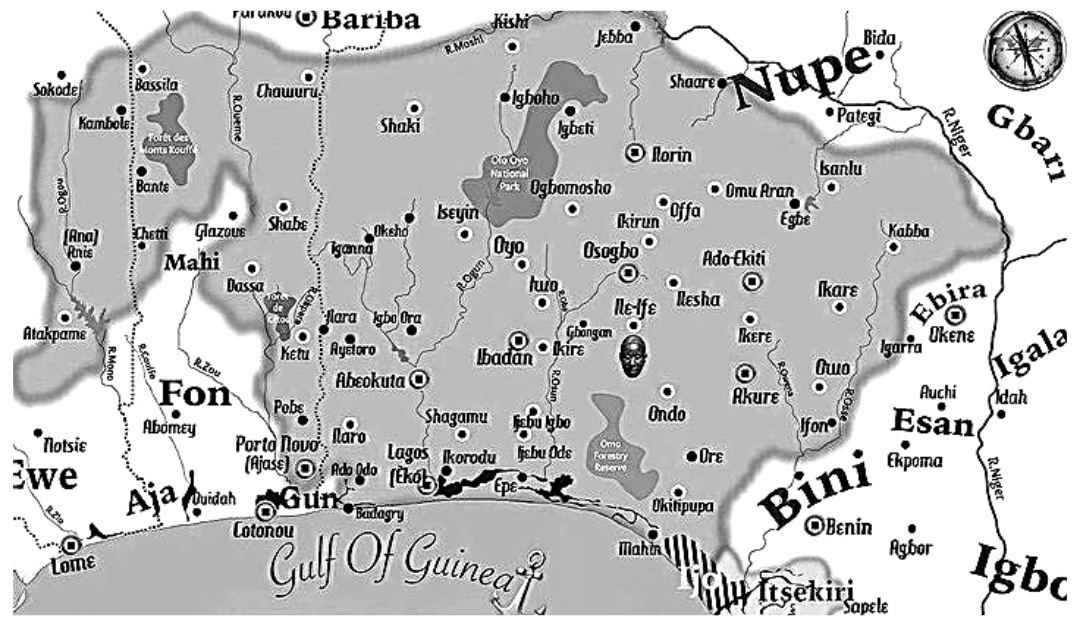 The country of the Yoruba people (Yorubaland)

As other Yoruba kingdoms began to emerge, each of them acknowledged Ife as the head of Yorubaland and looked up to Ife as source of life rather than being a rival. Although the Ife Kingdom was in existence before Oduduwa during the 9th and 10th centuries, but from Oduduwa’s time from about 1000 AD to about 1500 AD was a period of growing economic and political prosperity and power in the history of Ife. The whole history of the Ife Kingdom was from the 9th century to the 19th century.

Until about the end of the 14th century, the Ife Kingdom became an empire held together not by force of arms, but by the power of commerce, the belief in a common ancestry, and the manifest oneness of cultural heritage. 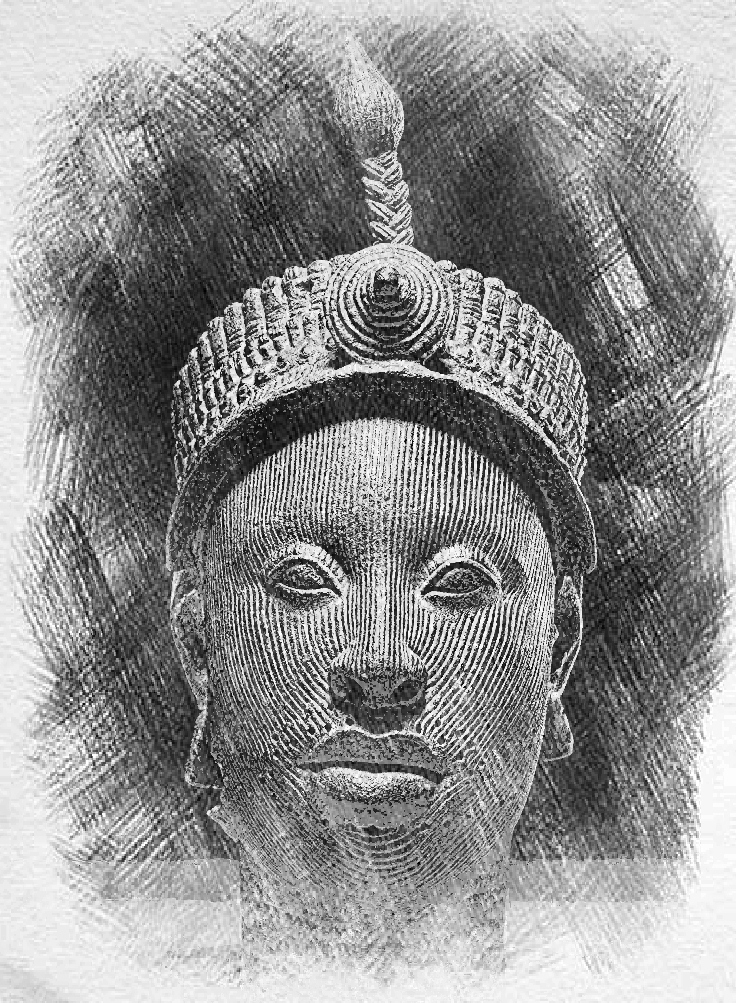 The brass and terracotta sculptures of Ife represent the best of naturalistic art in the history of tropical Africa. One scholar suggested the Ife terracotta’s, “stand comparison with anything which ancient Egypt, classical Greece and Rome, or Renaissance Europe had to offer.”

Leo Frobenius was the first European to see the Ife terracotta sculptures during his visit to the Ife Kingdom in 1910. He wrote they were “eloquent of a symmetry, a vitality, a delicacy of form directly reminiscent of ancient Greece.”

Because these Ife sculptures; as naturalistic art, stand far above and beyond any other found in tropical Africa, there has been much debate concerning them, due to Frobenius’ expressed opinion that no indigenous African civilization could have produced this level of naturalistic art, and it must be that “a race far superior to the Negro had settled here.”

During the Yoruba country’s height of greatness, grandeur, beauty, and sophistication. It covered the land territory of present-day Southwest Nigeria, a smaller part of Benin, and an even smaller part of Togo.

“The Yorubas deserve particular notice … they are a fine race … their houses neat, comfortable and kept in perfect order within. In character, they are generally honest, and in disposition proud, and even haughty.” – Dr. de Verteuil

The Fate of African People and the Transatlantic Slave Trade

The Yoruba people were latecomers to the enforced transportation of Africans to become enslaved in the Americas. The Transatlantic slave trade started in the 16th century, but it wasn’t until the 17th century when any Yoruba people were recorded in the trade. The total number of Yoruba taken to the Americas to become enslaved has been estimated to be about 1.12 million, representing a little less than 9% of all Africans taken to the Americas to be enslaved during the three centuries of the Transatlantic slave trade. Yoruba people were taken to most regions of the Americas, like the area of Chesapeake Bay in North America and Rio de la Plata in South America, along with of the Caribbean Islands of Cuba, Saint-Dominque (Haiti), Jamaica, Trinidad, Tobago, Barbados, Guadeloupe, Martinique, St. Lucia, etc. In Cuba, approximately 10 % of the population is Black, overwhelmingly descending from the Oyo people and they were brought in the 1700s to be enslaved.

Various sizes of Yoruba enslaved groups emerged in Virginia, North Carolina, South Carolina, Georgia, and Florida in North America. They were also taken to some countries of Central America, like Costa Rica, Nicaragua, Panama, and others. In South America, they were taken to Guyana, Surinam, Venezuela, and Brazil.

Saint-Dominque, the large island of Cuba, and the province of Bahia in Brazil did the enslaved Yoruba constitute sizeable percentages of the total numbers of African slaves. The estimates of Yoruba arrivals vary, but according to recent estimates, a total of 700,000 enslaved Africans were received into Saint-Dominque, of whom about 173,000 originated from ports on the Bright of Benin (coasts of modern Western Nigeria and the Republics of Benin and Togo). Of the 173,000, about 25% to 30% or 43,000 to 57,000 were Yoruba people.

“A large number of slaves that came to the West were Yorubas from Nigeria. Most of the revolts were set in motion by Yorubas (Yorubaland) and led by Akan (Asante Empire) from Ghana. The Yorubas and Akan’s developed a partnership away from Africa that they never had in Africa. The same thing is true with the revolts in Brazil. It was the Yoruba culture that held it together, and they couldn’t get to them until they broke through that strong Yoruba culture. The main staying power of the revolts in the Western world was Yoruba.” – Dr. John Henrik Clarke 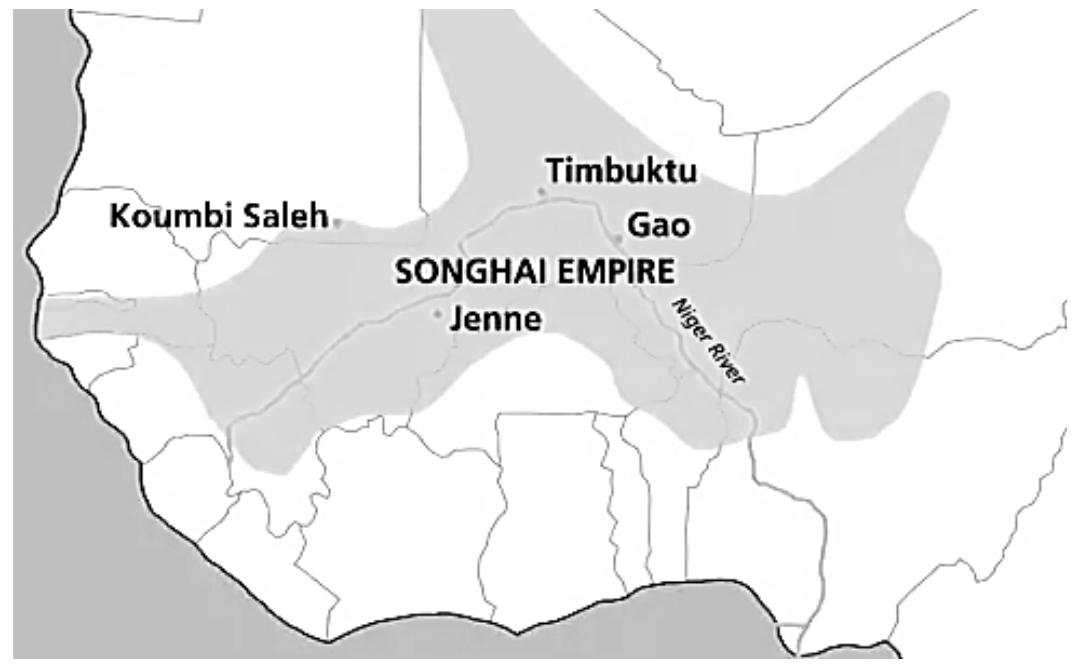 “Songhay’s (Songhai’s) greatness was due to something more than the remarkable expansion of its empire over a territory larger than the continent of Europe. That was great, but greater by far was the grand scale on which the revival of learning spread among the Blacks of West Africa─The Western Sudan, or ‘Land of the Blacks.’ Three of the principal centers of learning were Jenne, Gao, and Timbuktu.” – Dr. Chancellor Williams

The Songhai Empire was the largest African empire in West Africa before the Transatlantic slave trade. At its height of grandeur, beauty, greatness, and sophistication during medieval times in the 16th century, the Songhai Empire covered a land territory the same size as all of Europe combined. When the Songhai Empire fell in 1591 by the Moors (Arabs, Berbers, and Coloureds: Mixed Africans) of Morocco, and not the indigenous “Black-a-Moors” because it would not have been in their best interest to destroy their own books of wisdom and knowledge that was located at the world acclaimed University of Sankoré in Timbuktu. After the fall of the Songhai Empire, other African civilizations below the Sahara began to emerge and developed powerful state structures, such as the Yoruba, Igbo, Nupe, Hausa, Mossi, Borgu, Jukun, Edo (Great Benin), Asante, and Dahomey. The most powerful African civilization in the West African region after the fall of the Songhai Empire was Kanem-Bornu, as it maintained strength and leadership.

Along with the West African civilizations mentioned above, the interlacustrine kingdoms of East Africa such as Bunyoro-Kitara (present-day Uganda) and Zululand of South Africa became examples of leading forces in political development taking place in Africa right up to the eve of European colonization.

According to The Journey of the Songhai People, approximately 100 million Africans were stolen between 1591 to 1858. This was the African's physical holocaust, and as a result, African people are still suffering a psychological holocaust.

Africa was forcibly depopulated, its empires had disintegrated, its history buried, and its movement in step with other civilizations of the world had been abruptly halted. Only the most backward and inaccessible elements of Africa were left untouched by the invaders. This was intentionally done to bear false witness, making it believable for many generations of people in the future to categorize Africa as an example as a backwards continent.